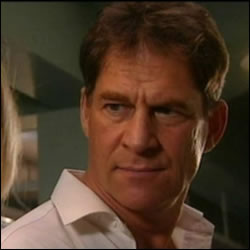 A dutifully bound Harry wants to do the right thing by his baby and so proposes marriage to Ellen. Ellen is surprised but pleased to accept his offer. Selena is not happy at the news, whilst Nina tells Ellen, he’s done the right thing.

Under a bridge, two men, Steve and Martin attack another man, Daniel. They drag him into a warehouse, where Steve shoots him in the leg. However in his panic, he also accidentally shoots his friend Martin.

Prostitute Jade comes across Daniel and calls an ambulance. In hospital Daniel is found to be a recovering addict. His mother, Morven, who is an old friend of Harry’s wife arrives and Ellen is angry that she thinks she can fix everything without even listening to her son. Harry is furious when Ellen stands up to Morven and patronisises her about not understanding as she doesn’t have any children. Meanwhile Daniel admits he has only been mixing with drug addicts to provide information to the police; something he wanted to do because he felt guilty about having introduced his girlfriend, who died, to drugs.

Steve brings Martin into the department but delays getting treatement for fear of the police. When he eventually collapses – it’s too late and Martin dies in resus.

Harry is about to announce his engagement to the department, when Ellen whispers in his ear that the wedding’s off. She doesn’t think they should marry just for the sake of the child.

Elsewhere, Maggie and Kelsey open the Hep B clinic for the first time, despite Nathan’s doubts. However, Maggie loses her temper with a woman, Louise who is allowing her daughter, Jade, to be a prostitute. Jade has contracted herpes after working on the side for extra money. Later, Maggie promises to be more understanding and praises Kelsey for her commitment to the cause, but does she have a hidden agenda?

Meanwhile, [ID 1347]Sam[/ID] is frustrated to learn from Comfort that he can’t be a paramedic until he’s 21. Annoyed that he can’t follow his dream, and fed up with his reception job, Sam tells Charlie he’s leaving and gives him his resignation letter. Charlie manages to calm Sam down and tells him he can be an HCA instead.

In a convent, Mother Gabriel, is unaware her dress has caught fire. Overkeen Sister Cecilia throws water over her and in her anger Gabriel slips on the wet floor. In hospital, Cecilia gets talking to regular Tommy, but is shocked when he tries to kiss her.

* Martin Hooper – dies after being shot.

* ‘I’m going to support her in the only way I see possible’ Harry tells Selena. When Selena hears it’s marriage, she replies ‘You are joking?’.

* Nathan is concerned about the amount of prostitutes coming into the department, Kelsey says ‘Maybe we should give them a little bell ‘unclean unclean!’. Whilst Maggie calls him a ‘judgemental oaf’

* Louise gets Nathan embarrassed when she pretends that she’s seen him before. ‘Works everytime’ she says as Maggie and Kelsey laugh.

* After Maggie’s outburst to Louise, Kelsey says ‘I just thought you’d be the last person to judge’.

* After calling off the engagement, Ellen tells Harry ‘I think I’ll be a good mother, but we’d be a terrible husband and wife’.