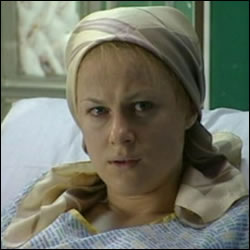 Nina calls Ellen to check she is ok, Ellen lies and says that she is at home on the sofa when really she is out and about. Ellen collapses in the street and Nina and Josh are called to the scene. Josh is shocked to see Ellen and Nina is forced to tell him the truth about her cancer. Ellen begs Josh not to send her to Holby and Josh says he will see what he can do. However, he can’t sway it for her and she is taken to Holby. When Tess sees Ellen she thinks she is being a drama queen until Nina tells her the truth. Tess is shocked and promises to try and stop anyone from seeing Ellen. Tess is keeping Ellen hidden. Kelsey and Sam think the mystery person must be a celebrity and they try to work out how to have a look. Alice offers to go – she can pretend she needs to update the patient’s records. In her cubicle, Tess apologises to Ellen for being hard on her. Ellen explains that she was pregnant but it was a molar pregnancy which left her with cancer. Alice goes to open the curtain but Tess stops her. Sam and Kelsey are watching and are intrigued as to who the patient could be. Later, they kick a bucket of water over by the cubicle in the pretence they will need to open the curtain to mop up the spill. Tess opens the curtain demanding to know what is going on – revealing Ellen. Kelsey and Sam are shocked and Kelsey tells Guppy and Charlie the news. Harry looks for Tess demanding to know why the patient in cubicle 7 (Ellen’s cubicle) has not been checked in. Before anyone can stop him he pulls back the curtain and is astounded to see Ellen there. Harry is furious that Ellen didn’t tell him about the cancer and says some hurtful things before storming off. Later, Harry apologies to Ellen saying he reacted that way because he was hurt that she hadn’t felt she could confide in him. Ellen explains that she simply didn’t want people feeling sorry for her and Harry promises her she will get through this.

Meanwhile, Harry talks to Maggie about her interview for the Consultant post and warns her she will need to watch her temper. However, she is soon arguing with Nathan and has to swallow her pride and apologise.

Elsewhere, Nathan asks Guppy for help with some policy issues he has, and invites him out for coffee. Guppy is flattered that Nathan would want his advice, and says yes. However, he is unnerved when Kelsey starts teasing him saying that Nathan fancies him.

Luke and Sol eventually reconcile and Luke has a surprise for him. He has arranged for him to have a football trial at Holby United. Sol is ecstatic.

A fire during a healing service causes injuries. Preacher’s Martin’s pregnant wife, Jo, is amongst them and her AIP condition is diagnosed by staff when Martin was thought to have previously ‘healed’ her. Paraplegic Gerry who is also brought in decides to dump his boyfriend.

A man, Bruce, is brought in claiming to have been attacked. He eventually admits to Selena that he was attacked by a bird.

* Gerry O’Neill – falls from wheelchair during fire at service.

* ‘Are you saying I can’t control my temper?’ says Maggie to Harry annoyed. ‘Point taken’.

* ‘Maybe Dimmock’s not so dim after all,’ Kelsey says referring to Alice, when she suggests an idea to uncover the ‘mystery’ patient.

* ‘What are you trying to do to me – manipulate me? Hurt me?’ says Harry when he first sees Ellen.

* When Ellen tries to explain to Harry that she didn’t want sympathy from anyone. Harry asks ‘Am I really that pompous?’

In this article:Cas Series 20, Sian Evans 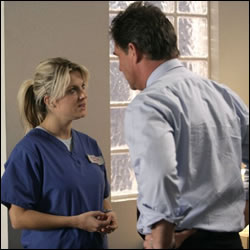 S20 E23 (4 Feb 06) : Trust in Me by Stephen McAteer Episode Summary Ellen tries to speak with Harry alone but a phone call... 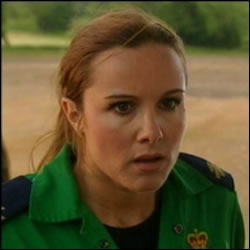