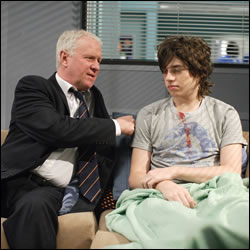 Zoe races to the court with the file that could clear Maggie’s name, only to be met by Marilyn, who bribes her with promises of a fantastic new job.

Zoe reluctantly agrees to stick to the agreed lie but, as she takes the stand, she is interrupted. There has been a major incident, a landslide at a quarry, and she is urgently needed back at the ED.

Snezana and Jeff are caught in the landslide and struggle to save themselves and the workers. Marko, particularly, is severely injured and makes Snezana promise to take his daughter, Natasa, back to Serbia if he doesn’t pull through.

Maggie, meanwhile, goes to the quarry with the team and impresses everyone, including Zoe, with her professionalism and dedication to her job. Zoe returns to court and decides to tell the truth, even though it means exposing her affair with Sean in front of everyone.Maggie’s name is cleared and, delighted, she shares a passionate kiss with Charlie.

Work continues at the quarry but Marko does not survive. Rob, the foreman of the quarry, goes to comfort Natasa but he is dragged away by Mina, one of the worker’s wives. With Maggie’s help, Mina finds the strength to accuse Rob of raping her, and he is taken away by the police.

Maggie later tells the team that the court case has changed things and that she can no longer stay at Holby. Although she’s not quite sure where she’s going, she has decided her first stop will be Serbia – she is going to take Natasa home.