[ID 1570]Elliot[/ID]’s wife, Gina, arrives for an appointment at Holby. Meanwhile, Elliot is treating a patient, Margaret, who has Motor Neurone Disease and has had stem-cell treatment. Elliot is encouraged by his patient’s progress and suggests the treatment to Gina. Gina is at first reluctant but later decides not to give up the hope, that Elliot so desperately has.

[ID 1535]Matt[/ID] arrives on the ward as a newly qualified doctor and his first patient is Bridie, an elderly lady with burns on her legs. However whilst Donna is looking after her, her condition worsens. Matt is distraught when he is unable to save her. Bridie’s foster child Ewan makes a complaint and a post mortem is to be held. Bradley suggests cooling things off with Donna so that he will be able to show his support for her in an official way. Later Ewan withdraws his complaint, however Matt asks for a post moretem anway to find out why she died.

Meanwhile, Reg is flustered after seeing Donna come out of the staff shower and gets nervous again later when a patient, Carmel, with abdominal pains removes her top. He manages to untie his tongue long enough to diagnose a cyst. But Mickie teases him for the longing looks he’s been giving Donna. Reg shows some courage when he finds Donna upset over her split with Bradley and comforts her. However when he later sees Bradley and Donna make up, he is again at a loss.

Meanwhile Connie decides against a move to Stockholm.

* ‘A doctor learns by experience,’ Lola tells Bradley. ‘Like you learn by counting paper clips’.

* ‘You’ve been in your dungeon too long!’ Mickie tells Reg, after seeing his poor people skills. ‘People really are a mystery to you, aren’t they?’

‘We’re managing your death when we could be fighting for life,’ Elliot tells Gina, who is at first reluctant to get more help.

‘ What do you think I should do – allow him to hope?’ Gina confides in Connie. ‘This might sound selfish but this is my death and I’ll choose how to handle it.’

In this article:HC Series 8, Michael Jenner

Episode Summary Heavy-drinking Abra turns up in Holby again, needing a big favour from surgeon Ric, who he spent time with out in Ghana....

Episode Summary Connie tells [ID 1570]Elliot[/ID] that her husband, Michael, has been offered a job in Stockholm and she is considering relocating there. Elliot...

Episode Summary Ryan is back in after having beaten up Cash. [ID 1443]Mark[/ID] feels responsible for him and when police come in to question... 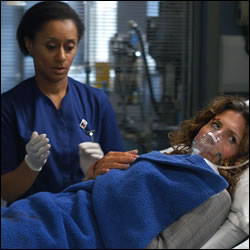