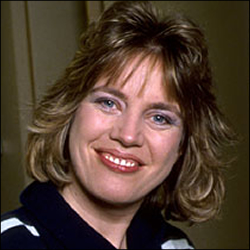 Sadie : I beg your pardon?

Tough receptionist Sadie Tomkins replaces Susie from S3 E1 and has a minor role in the show. Widowed from husband Bill, Sadie lives with her two children and his mother. Polish porter Kuba takes a shine to Sadie, however in S3 E4 when he asks her out on a second date, with her and her children – she backs off thinking he’s getting too personal. In S3 E6, a car collides with two minibuses packed with children. The driver of the car, Alec was already on the way to A&E after injuring his hand. His partner rings Sadie, as she doesn’t know where he is. Sadie suggests phoning the police – realising he is the dead driver of the car. In S3 E7, a foreign worker, Colin, is brought in by his boss, with hallucinations and a cut to his face. The boss says he has been inhaling paint stripper. David believes his story, but Cyril is not convinced. Sadie brings them more evidence, after she speaks with Colin who says, their work place has poor ventilation. In S3 E9, Megan confides in Sadie that she is missing Ted. Next episode, she again speak with Sadie about her marriage problems and that Ted wasn’t keen on her moving to Cheltenham.