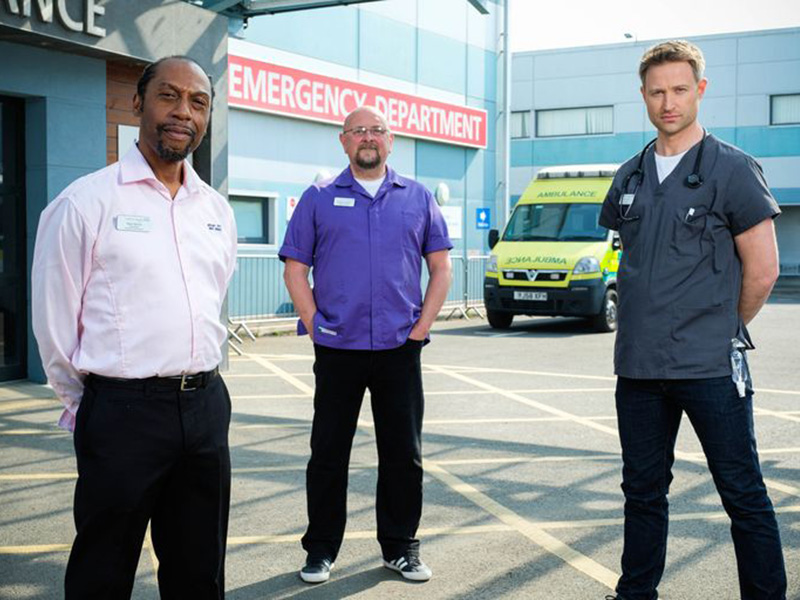 Holby.tv are thrilled to report that Tony Marshall (Noel), Charles Dale (Big Mac) and Richard Winsor (Cal) are returning for a special episode as part of the 35th anniversary celebrations later this year.

With two of the characters; Noel and Cal already dead in the show, viewers may be wondering how they can return but we can reveal CASUALTY will be going back in time to 2016 for the one-off episode where the team in the Emergency Department are faced with a chain of events that change the course of their future.

‘It was strange to come back but rewarding at the same time as the episode tackles yet another important subject,’ said Tony Marshall. ‘It was a joy working with my son as well as of course Charlie Dale and Richard Winsor. We had to abide to Covid restrictions which is not easy but we did it. The audience are going to love the episode!’

Charles Dale was equally thrilled to be back for the episode, ‘It’s lovely to be back with my friends again, especially THE Tony Marshall, reunion tour?’

Loretta Preece, Series Producer, says: ‘There is a 35th anniversary smorgasbord to offer both new and old fans of Casualty with huge stunts, faces from the past, some indelible new characters and some wonderful story twists. Elinor Lawless as new consultant Stevie makes a splash right from her first episode and I am confident she will become one of the most talked about characters in Casualty’s history. There are huge, heart-breaking stories for Ethan and Jacob later in the series and I’m delighted to also announce a wonderful two part special to be written by Barbara Machin, one of television’s most prestigious writers for Christmas 2021.’

Yes peeps we are back for a special one off episode set in 2016 when I would have been alive !!! Hope you all enjoy X