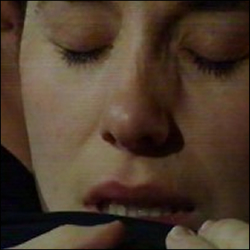 Tom Harvey takes an unconscious Holly to a disused part of the hospital and ties her up. When she wakes, he tells her how they were meant to be together and plans to fall asleep with her forever.

Patrick, finding Holly missing and seeing her smashed up car, suspects Ed Jameson and goes to look for him at his workplace. He denies knowing where she is, and Patrick’s attention draw to Tom, who he finds has being given bail. Patrick looks through the security videos and finds he has been outside the department. Patrick, Spencer and Dan start a search for Holly.

Meanwhile, Colette talks to Natalie about why she had to give her up for adoption. Just as they seems to be making amends, Natalie storms off when Colette doesn’t introduce her properly to Penny. Later, Colette opens up to Penny – and she tells her that Natalie will be back once she has calmed down – she does, in the middle of Josh and Colette having a serious talk about their relationship. Josh is shocked.

Chloe is upset that Janine has put a complaint against her, and fears losing her job and the money she has.

Fin and Mel arrives at the cave to meet Liz, who’s school friend, Emma, has fallen inside. Fin goes to look for Emma in the cave, and finds she has a tension pneumothorax. Emma is brought out and in A&E tries to make friends with Liz.

An elderly man, Peter, is brought in after suffering chest pains. He is depressed after his wife passed away last year, and asks Charlie not for him to be resuscitated again. His son, Stuart, comes to visit, and when Peter goes into arrest forces the team to resuscitate him. Peter, is at first unhappy that his wishes weren’t adhered to, but after talking with Stuart, is glad that he was given another chance to live.

Tom, leaves Holly tied up as he goes to fetch some belongings from his car. On his return, he bumps into Andrew – he pushes him down the steps. Andrew is taken into resus, where the team are unable to save him.

Back at the disused ward – Tom gets Holly to wear a silver dress for him. She pretends to feel faint, kicks him and then tries to escape. She throws a chair out the window – which gains the attention of Patrick, Spencer and Dan, who rush to save her. Tom catches Holly again and injects her, making her unconscious, before Patrick and Dan rush in. Dan chases after Tom, up to the top of a balcony staircase – where Tom threatens to jump, he slips and Dan offers his hand, but he is unable to hold on and Tom falls. Patrick, meanwhile, is giving Holly mouth to mouth in an attempt to save her – slowly she comes round, and they hold eachother.

Charlie faces the hard task of telling a heavily pregnant Duffy that Andrew has died. She is distraught and Charlie takes her into Resus to say goodbye.

* Tom takes Holly to a disused part of the hospital ‘Curie Ward’.