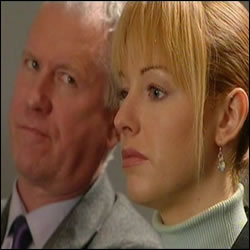 The trial continues, this time Pete is in the witness box. Claire goes to support him, Luke comes and apologises for over-reacting last week, however, he says she must tell the prosecution about Pete’s revelation. Claire tries to speak to Pete but he tells her he was drunk and that Claire should forget what he said. Claire tells him she confided in Luke and he wants her to tell the prosecution. Pete says that the conversation is purely heresy and is inadmissible in court.

Bex and Charlie turn up to hear Pete’s evidence. Charlie tells Luke that he should not be there with Claire, he says that Bex is being very courageous coming to hear Pete’s account of events and that as her ex-husband he should show some loyalty. Later, Claire tells Luke that Pete said their conversation is inadmissible in court. However, Luke double checks with the prosecution lawyer. He tells Luke that if the person is a witness speaking under oath it would be a crime not to disclose what they know. That evening Luke warns Claire that she could be found guilty of perjury or of withholding evidence, Claire is furious but he warns her that if she does not say anything they are finished.

Abs complains that his back his itching, Maggie takes a look and says that he has hives. Later Tess also has an itchy rash, she realises it must come from the new washing powder which is designed to kill the MRSA bug. She tells Sam to discard all of the powder.

Harry tells Abs he has a new tenant for the house and he must move out today. That evening Abs and Nina meet the new tenant – Guppy.

Outside Nina and Abs’ flat, a bike has crashed into a van. At hospital, Guppy treats biker Michael, who complains about suffering dizzy spells and people thinking he isdrunk all the time. Michael thanks Guppy for diagnosing his problem.

The paggenger in the van, elderly man, Gregory came to be injured after one of his daughters, Hayley, kidnapped him from his nursing home because of the abuse he has suffered there. When his other daughter arrives, the pair argue about Gregory’s situation.

An overweight boy, Darren, collapses at the court and is brought in with his mother. The mother has been overfeeding him as a comfort for bullying he has been getting at school – Selena tries to make her see this is making his condition worse and suggests a lifestyle change.

* Gregory – paggenger of van in crash.

Abs and Nina kiss on the stairs;

Nina : Yeah, that’s the plan! (Claire walks down the stairs and past them)

Claire: Do you hate him enough to see him destroyed? Cos that’s what’ll happen if he goes to jail!

Luke: You’ve got to tell the truth, Claire!

Claire: No! I’m not saying anything! Not tomorrow, not ever!

Luke: Well, if that’s your choice, then Pete’ll have destroyed something else. Us.

Claire: I’m not being blackmailed. Even by you.

Luke: It isn’t blackmail! What do you think, I’m just gonna stand by while you put Bex through this? You can stop it, you can tell the truth. It’s your choice.

[Luke jumps back into the cab and the cab drives away, leaving Claire there, unsure about what to do]

* In court, Bex’s first text message (at the Valentines Ball to Pete) is revealed to have said ‘Slumming tonight? What a slapper’. Her second text read ‘Here I come. Watch out for fireworks!’

In this article:Cas Series 19, Ro Hume 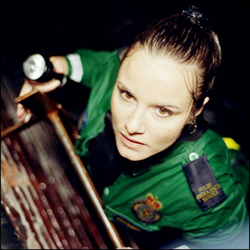 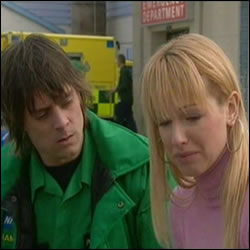 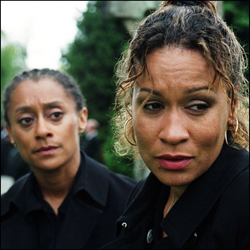 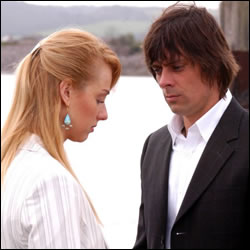