In her flat, Claire watches the CCTV footage over and over again. Later Luke meets her, saying he has something important to tell her. Claire braces herself to hear the truth about Pete’s death but Luke asks her to marry him. A disgusted Claire storms off.

Elsewhere, Will comes in to see Selena. He tells her he is taking her away for the weekend, but she says she is busy and cannot leave work yet – much to his annoyance. Later, Selena collapses with an abscess on her wound. Harry looks for Will and finds him in an uncompromising position with Ellen.Guppy apologises to Harry about accusing him of misconduct. Harry tells him he shouldn’t have questioned his integrity but to say no more about the incident.

Kelsey and Woody flirt after their previous night out.

Maggie misses an appointment with an old people’s home she had lined up for her father. Harry pulls strings to keep open the place for her.

Sally and Steve’s baby has a shaking fit at the airport, and are taken into the ED department, where an infected umbilical cord seems to be causing the problem. Meanwhile Sally suffers abdominal pains, and the team are confused to learn she has had a hysterctomy, so the baby she claims is hers cannot be. They believe she was duped into belieiving she was pregnant in an operation in Germany.

A teenager, Ashley, is brought in with cuts to her face after binge drinking caused her injuries. She is sick over Selena. After being discharged, still drunk she falls down an escalator at the shopping centre. Kelsey comforts her when she is brought back in.

Coach Elijah hurts his leg after falling over a hurdle. His athlete girlfriend discovers he has been taking steroids and says their relationship is over.

In this article:Cas Series 19, Ro Hume 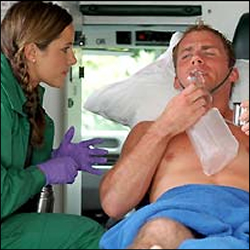 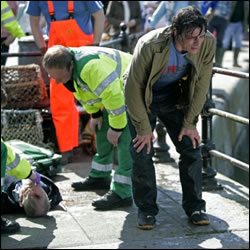