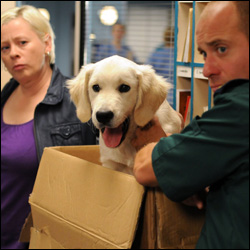 Both eager to please Nick Jordan, Ruth and Toby see their chance to impress when the casualties of a major road accident, caused by teens Sasha and Darren messing with an abandoned van, are brought into the ED. Ruth is irritated when Jordan lets Toby send her to work with Adam, while Toby gets to assist Jordan. Later, Adam teases that she’s ‘not Jordan’s type’.

New boy Jay annoys Tess on his first day by getting too involved with the personal affairs of the road accident casualties. When Sasha and Darren start to deteriorate, the team battle to save them. Adam’s intrigued when Ruth is forced to step in for Jordan at a critical time, but despite her best efforts, Darren dies. Later, Toby is shocked when Ruth accuses him of fancying her.

Elsewhere, Jeff offers to look after Dixie’s dog, Little Abs, until she finds somewhere to live. But Dixie gets a shock when she arrives at Jeff’s house with a blanket and learns that he and his wife have split up and he no longer lives there.

Also, Snezana is horrified to discover that all the money she had in her locker has been stolen, Zoe reveals her softer side when dealing with Sharice, and Jessica fears she’s pregnant.

In this article:Cas Series 23, Mark Cairns 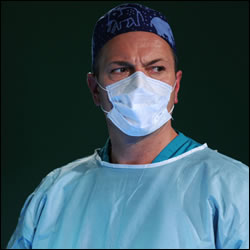 S23 E21 (17 Jan 09) : No Going Back by Abby Ajayi Episode Summary Alex’s surgery is unsuccessful and he confides in Jordan that he... 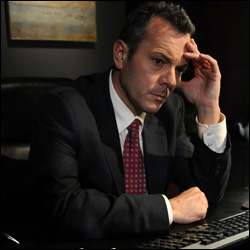