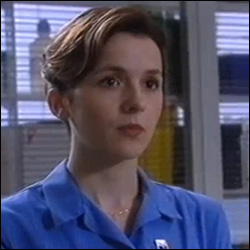 Jess arrives for her first day on the AAU and is immediately thrown into the deep end! There’s been an RTA involving a school bus, and lots of the students have been admitted as there’s no room in A+E. Steve’s worried when the teacher who was driving tells him that Robbie was on the bus, and he’s even more upset when he finds Robbie and two friends mucking about in the hospital corridors.

Danny tells Diane that he’s moved a few more boxes in, but she’s clearly not so keen. She tells him that she hasn’t got room for them. Meanwhile, Kath is encouraging Terry over his looming operation. She says she’ll lie for him again, as he told Lisa it was just a hernia. Diane tells Ric that her instincts are telling her it’s too much too soon. Ric appears a little jealous, and is reflecting a little on their past relationship.

Meanwhile, Ric’s daughter Jess’ day gets even more stressful, when she sees Robbie’s friends steal drugs from a trolley. Steve chases him round AAU until he trips and falls onto a scapel that he stole from A+E, bursting an artery. He’s rushed up to Keller theatre where Ric operates.

Diane tells Danny she feels like he’s taking over her life. Danny harshly tells her that she’s a control freak, and when she tells Ric this, he agrees and says she does like to take control. After talking to a patient, Diane decides to take the risk and offers Danny a key.

The boy’s father says that Steve was wrong to accuse his son of stealing drugs. He says that he should be on GBH charge. Robbie goes and gets the pills which have been hidden in the toilets, and his friends say that it was Robbie that took them. Thankfully, Jess turns up and says that it’s all on security cameras – and points. Robbie asks why they didnt mention that before, and Jess cheekily tells him that they’re broken!

Danny invites Lisa, Ben and Sandy round to Diane’s flat and she returns to find them partying, and Lisa smoking. She says she’s had a bad day, and Danny’s friends leave. Diane realises that if Danny’s there then he can comfort her, and the two share a passionate embrace.

Meanwhile, Steve congratulates Jess on her first day. But it’s been pretty hectic all round!

Kate, involved in the RTA. She’s 37 weeks pregnant and gives birth to a little boy. The baby’s father, Patrick, is brought in with a fractured left tibia (leg) and a right pneumothorax but he goes into cardiac arrest and dies.

Louise, driving in the RTA. She is the Geography teacher of the students. She has fractured ribs but it becomes obvious after she refuses tests that she has overdosed on migraine tablets after the traumatising experience of losing her son to her ex-husband.

Terry Fox, brought in to remove a tumour in his colon. There are complications and his gall bladder is removed, but he survives.

Alan Bridger, falls on spatula in his pocket after being chased round AAU. He makes a full recovery.

Margaret is brought in for a heart valve replacement. She has a thing for Tom Campbell-Gore! She doesn’t want to be resuscitated if she arrests, and she does arrest but Tom goes against her wishes and attempts to resuscitate her but to no avail. 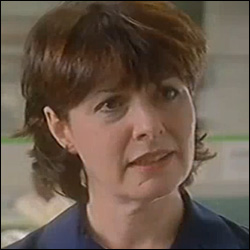