An Asian school boy, Vijesh, is beaten up while delivering newspapers from his Dad, Bharat’s shop. The staff try to persuade his family to call the police but they think the police won’t do anything. Later Bharat is brought in with multiple injuries after being attacked by four youths in his shop.

A 7 year old boy, Sam, is brought in by his teacher. Lucy diagnoses appendicitis. He needs an operation, but they can’t get hold of his single actress Mum, Carrie, to sign a consent form, to save his life. Duffy has been considering an abortion, in the fear she can’t cope with being a single Mum, but Carrie says however hard it is, Sam means everything to her.

A carpenter, Ken, who’s been waiting for a heart bypass for over a year, is brought in after collapsing at his workshop. Alex has been watching him in his cubicle, when she just steps out to deal with a difficult female patient, who’s dropped her bed pan. As Megan takes his wife, Dawn, and son, Danny, too see him, she finds his heart has stopped.

Lucy tells a patient off for wasting their time, when he calls an ambulance, after swallowing a staple. At a meeting, Charlie learns Queens Hospital is getting the new trauma centre. He is angry and tells his consultant, Mr Flannagan, he does not care about his department.

* Ken Gardiner – on heart bypass list, collapses at work. He later stops breathing in his cubicle.

* Man brought in after swallowing a staple.

Charlie : He tried to jump off a bridge under a train.

Paramedic : How come he didn’t kill himself?

Charlie : He missed, landed on top. (she laughs)

Megan : I had a lovely chat with him earlier and he’ll be delighted to see you. Ken? (opens curtains – his monitor is bleeping) Alex! Resus Team!

In this article:Cas Series 4, Ginnie Hole 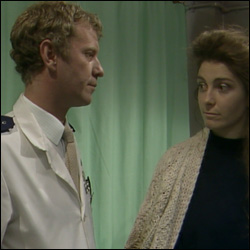 S4 E6 (13 Oct 89) : Charity by Margaret Phelan Episode Summary A charity ball is being held at the hospital in aid of a...