Elliot’s wife, Gina, arrives at Holby because her tracheotomy has become infected. After some ambiguity over details of the original procedure and a chaotic operation, both Elliot and Joseph have some confessions to make. Joseph admits to Elliot he has OCD and reveals more details of his brother’s attempted suicide. Whilst Elliot admits to Connie about his wife’s treatment and says he will resign his position as Clinical Lead.

Kyla’s ex-husband, Harvey, turns up at Holby wanting to take Max on a fishing trip. Kyla initially agrees but later reneges on the deal, leading to a furious row between the pair. Kyla later feels guilty for using her son as a weapon and lets Harvey take him out.

Meanwhile, Connie tells Sam that after the recent internal inquiry he must report to Elliot. However, the maverick registrar is soon back to his tricks again when he treats a patient, Evan, who needs an aortic valve replacement. Evan tells him he used to be a male escort and one of the hospital volunteers, Marcia, was a client of his. Worried his fiancee, Colleen, will find out about his past, Evan pretends that Marcia is his aunt. Sam agrees to keep his secret, but when Evan falls unconscious after refusing to have his operation, Sam takes the opportunity to go ahead anyway – embroiling Chrissie again in his deception. However when Evan comes round, he decides to tell Colleen the truth about his relationship with Marcia. Colleen makes a complaint to Elliot.

Kyla treats a man, Clyde, with a broken leg and shoulder injury. He plays cards with his friend on the ward.

Written by by Nick Warburton

* Joseph reveals how his brother Harry had phoned him as he was worried about his exams. He spoke to him but when Harry phoned him a second time, Joseph decided not to pick up. Harry had then taken an overdose, which has consumed Joseph with guilt ever since. This explains his problem with people not answering their pagers and phones.

* Joseph emotionally tells Elliot, ‘I want someone to help me – can you do that? Can you help me?

In this article:HC Series 8, Nick Warburton 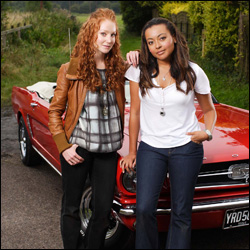 S12 E3 (27 Oct 09) : Myself, Coming Back by Nick Warburton Episode Summary When Donna has to deal with Derek’s meagre effects, she finds...

Episode Summary Tricia is back and her presence certainly causes a stir amongst the Williams family. There is friction between [ID 1443]Mark[/ID] and Tricia...