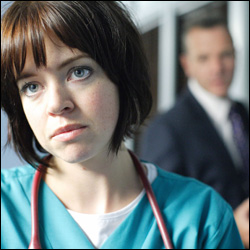 Adam is forced to confront his past when he has to treat two little boys trapped in a crashed car. He bonds with the youngest, Joe, but is devastated when he is unable to save Joe’s brother or mother.

Adam visits his brother, Alex, a wheelchair user, to assuage the guilt that has plagued him ever since he freed himself, but not his brother, in their own family car crash. Dealing with Joe and his family has brought all the memories flooding back.

Toby, meanwhile, is in a good mood after his night with Ben but is uncomfortable when Ruth lets slip that she saw them in bed together, and denies there is anything going on.

Elsewhere, tensions continue to simmer between Ruth and Jordan – especially when Jordan uses Ruth to cover an error regarding the name of a drug in resus. And Jay and Kelsey play tricks on Big Mac, much to his annoyance.

In this article:Cas Series 23, Sasha Hails