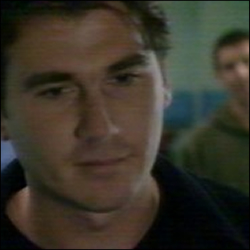 It is Charlie’s first day back in the department. At the beginning of the episode, he walks into recus and Colette mistakes him for a patient, directing him to reception. She later realises her mistake when she sees Charlie in uniform and apologises. When Charlie checks the messages on his answer phone, the staff have sung “welcome home” to him.

A man, Brian Collins, goes for a job interview. He is nervous, and ends up telling the interview panel about his wife, who is in a wheelchair. Brian says he caused the accident that put her in the wheelchair. He leaves the interview, and on the way back home he crashes. He is taken to hospital, where his wife rushes in to visit him. Brian is depressed and says he ruin’s everyone’s lives, but later gets a call telling him he has got the job that he was interviewed for.

A boy, Denny, goes for a ride on the back of his football coach, Ed’s motorbike. Denny’s mother Jody realises he has forgotten his inhaler, so follows the bike in her car. The motorbike is involved in the car crash with Brian Collins. Ed dislocates his shoulder and Denny breaks his wrist. Brian’s car explodes, and Jody is caught in the explosion. She has to have surgery when they all get to hospital. Ed reveals to Denny that he is his father. Denny is angry that he had not been told sooner.

A girl, Christine, is taken into casualty by her mum, after she swallows some clock batteries. She says to Patrick that she was feeling tired and she thought they might give her a boost. Christine has surgery to remove the batteries. Barney later gets hold of the batteries, and puts them in Chloe’s bike light, which was broken.

Charlie goes to see Dan Robinson about the beds in A&E, and says he wants them gone. Dan tells Charlie that a journalist wants to do an interview with someone from the hospital. Charlie asks Max to do it, who in turn asks Holly to go.

Adam and Reuben go to see their new flat, and argue over how to decorate it.

Mel and Penny play a game in the ambulance, rating the male staff in the department out of 10. Josh gets 6, Barney – 6, Max – 7, Patrick – 8 (if he keeps his mouth shut) and Mel gives Dan Robinson 8 too, which Penny disagrees with.

Colette tells Barney that at a previous job, they sorted out a rude consultant by fining him a pound every time he was rude. Barney says they should do the same for Patrick, and soon, the rest of the staff know about it. They provide Patrick with a list at the end of the shift, but then find out from Spencer that he has bought pizza for them all.

[Patrick has just read his forfit list, and Spencer has revealed that Patrick had bought the staff pizza.]

Barney: Patrick – thanks for the pizza.

Barney: We had no idea.

In this article:Cas Series 15, Jeff Povey