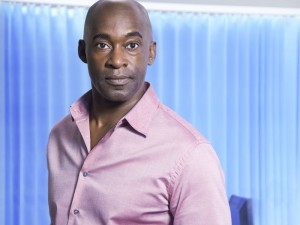 An exciting comeback for Ash.

News of Patrick Robinson’s return to Casualty have been met with great excitement. Playing Ash, one of the most notable characters in the 90’s years he now returns in a doctor role. Patrick talks to holby.tv about his Casualty comeback…

How were you approached into returning to Casualty?

I think the time was pretty good for me as an actor and also there’s been enough years for it to have gone on another generation that know Ash. It’s been 15 years – most people I mention it to don’t realise it’s been that long!

I was in The Bill for three years and have also done theatre but most people still know me as playing Ash. I never dissed that because I felt it was a real positive thing for me to have and because he was such a positive character generally, the audience still sees that, so that’s why I felt it was a good thing to come back to. But there’s still a challenge there – he’s a doctor now and playing a doctor is never easy!

What’s happened to Ash since we last saw him?

Having left 15 years ago – that’s plenty of time for a whole manner of things to have happened to Ash! I thought it was a good shout for producers who mooted the idea to me as I love the character. Having played him for six years, I put forward certain ideas such as him becoming a doctor. They liked the idea and our fantastic medical advisor, Pete Salt, said there had been quite a few instances in real-time that this has happened.

His background comes from when he lived in America – he went over there, to train in the Bronx – gun shot wounds, stabbings were part of what he specialised in.

In terms of what happened to the character previously, he was a staff nurse then became clinical nurse manager so had a promotion within his six years there so I think he was still looking to move forward so it was a natural progression for him.

When Ash left, we saw him get married to Laura. They had a child but things didn’t work out. So one of the major reasons he’s back is, bottom line, is to oversee his wayward daughter, who we will see in the future. One of his flaws is that he didn’t do very well when it came down to his child, part of that now is to readdress the balance.

He’s also always been linked with Charlie – he was Charlie’s best man when he got married to Baz, so they always kept in touch but you never saw that in terms of background and so at the ED, where Charlie works they just so happen to need a Consultant. Whether Ash wants to take it as permenant or not we’ll see but in the meantime he comes in as a Locum.

Ultimately Casualty is showing he can be a good doctor first because that’s the point, he’s there to do a good job and Charlie trusts that Ash has made a good doctor – we see that first before seeing why he’s back at Holby.

So you’ve had quite a bit of involvement in Ash’s development?

I suppose I have had and I’m chuffed they’ve asked me what I think. I remember when I first went for the interview of Ash – there wasn’t much on the paper – it said Ash is a very conscientious nurse and he lives at home with his mum. That was it! So ofcourse you do one series and you then get some say, so you can build up the character, I suppose I was very pleased that by doing that, six series in the end, they liked the character. I’d rather it be something I could make as real as possible.

What kind of doctor is Ash?

He’s a doctor who doesn’t deal with the mechanics of being an admin guy – he wants to be hands on, treat people who need help so he’s always trying to bypass how things get done. He doesn’t like authority. He’s looking to help rather than be a Consultant who runs things.

How does he get on with the rest of the staff?

Generally he fits in quite well and because of his training as a nurse he knows what’s quite important but he doesn’t fit in completely. There are a few people he rubs up the wrong way. They tend to be in the management side of it. Zoe is Clinical Lead and she has to deal with managing the department so that’s where things can get a bit chilly between them. A bit of friction there!

Will there be any love interests for Ash?

We shall have to wait but I’d like to think if there was any kind of romance happening with Ash, I’d like it to be a will-they-won’t they thing as it’s good to see an audience hoping! One of things I think is quite difficult in a long running series is that when two characters that are regulars get together – somewhere a long the line something has to give and someone has to leave, it can’t be both!

Have you had to do much research since your return to the show?

A little bit. Certain things are like a muscle memory, when suddenly you’re back in resus – crash as we called it then – and things come back but ultimately this time I’m the one driving the scenes as a doctor. All the technical jargon! But ofcourse things have changed so much, from accident and emergency department – now ED – little things like that are tricky to remember.

And how has it been in terms of production change?

When I was last filming it was back in a warehouse in Bristol, so this is all new which was good for me – it didn’t feel like I was going back, I’m going on forward to new challenges all the way!

Having worked on The Bill, it had a similar set up. They had a family, like here, with quite a few regular actors, lots of teams of crew and so I went into that family seeing that it was a bigger family than I had at Casualty way back then. I kind of know it now, it’s not like it was before at all.  There was only one person that I was working with before onscreen and that was Derek Thompson, so he’s the link for me. It’s lovely. Derek and I have kept in touch over the years, I love working with him.

Are you pleased at how your career has progressed?

All the things with being an actor have been what I wanted to do and I continue to do that. Even after the big pride of doing Casualty, I was at the RSC for four years. I knew from drama school I wanted to get good grounding to be seen as a good actor –  that was my brief, so any work I get, I wanted to get on my ability and that’s what I’ve achieved as far as I’m concerned.  I went on to do a lot of other things after Casualty so I’m very happy with my CV.  I did a movie out in Thailand with Steven Seagal – I played a CI agent opposite him and that was great. It was an experience being on a big film set and even Warhorse – which was at the West End for a year. You really have to work hard and love it. Sometimes the arts doesn’t pay as much – you have to marry the two if you can. I’ve been really fortunate to do good theatre and TV.

So are you based in Cardiff now?

At the moment the best thing to do is relocate here as I am here more than where I live in Stratford upon Avon. That’s where two of my children are but they are a lot older now. It’s time for me to have my time so I’m not rushing up and down the motorway. Having been in the country and also London, overlooking the sea in Cardiff is just lovely.

Would you encourage any of your children into acting?

I’d encourage all my children to do what they really want to do, just have confidence and be who you want to be but yes I’d tell them the truth about this profession; its precarious. You’ve not got to just to like it, you’ve got to love it. I’ve been an actor for 26 years and if you’ve been doing something for over 20 years you’ve surely got to love it. All the stuff that I’ve done, I’ve loved. Now you can be on the box for various things, the acting is kind of secondary – people just want to be famous. I keep telling my children what is the key!

My youngest two are both showing signs that they want to perform so I encourage their spirit but they will get the realities when they’re a bit older but at the moment they’re doing really well.

Do you ever watch Casualty?

Before I was in it I didn’t watch hospital dramas. The thing with me in terms of watching is I don’t really watch me. I got to that stage where 6 years you’re in a series and do you watch them? No. Do you have them as a back catalogue? Yes. Have I watched some critically? Occasionally. But I’m not good at watching hospital dramas or watching me!

How long do you plan to stay on Casualty?

I’m very happy to be coming back and that always depends on the powers that be, I guess it depends on audience thoughts. I’ve had great feedback about his return. Right now it would be great for him to have a longer stint!