Janice and Alistair are arguing following Janice’s unforunate miscarriage. Janice feels like they should try again immediately, but Alistair thinks that they need a break – for the sake of their health and sanity. Janice takes this to mean that Alistair doesn’t want a child, and Alistair tells Janice that wanting a child is becoming an obsession.

Sam is suspicious that 20 year old Claire is anorexic. In a conversation between the two girls, it is revealed that her weight loss is due to the traumatic incident of her father leaving. Clare’s mother, Liz Bradley belives Sam bullied Claire into talking to Dr Kumar, the eating disorders specialist and later, Sam walks in on Liz trying to discharge her daughter from Darwin’s care.

Sam puts Claire under section because of a mental disorder that requires attention. She explains that she is in her rights to detain her for 72 hours. Claire’s mother is rude about Sam as Alex is entering the room. Alex persuades Claire to stay one night, and Liz accepts on the condition that Sam stays well away. Alex tells Sam that she’s not allowed any further contact with mother or child, and says that he’s trying to look out for his lover. Liz makes an official complaint and Alex and Sam are told off by Alistair, who is taking over from Meyer while he’s on sick leave.

Sam later confesses to Alex that she got so involved with Claire because at a similar age she’d had an eating disorder due to problems at home.

Chrissie offers Alistair a shoulder to cry on and a drink in the bar. Alistair tells Chrissie all about his problems and the evening results in a passionate kiss in Meyer’s office. When he arrives home after his affair, Janice tells him that she’s decided he’s right – she’s waiting before trying again to have a baby. The next day, Chrissie tells Alistair that he has a wonderful relationship – a loving wife, and someone to sleep with on the side too.

Janice goes to see Owen again and has changed her mind. She no longer wants to wait and rushes off to tell Alistair the news, but he’s not so enthusiastic. He arranges lunch with Chrissie again, and it looks like their relationship is more than just a one night stand.

Marija becomes depressed and nervous when she receives a letter from her friend Katia who has been staying in England for nearly a year and is now being deported. Danny jokes about it but Marija is concerned and back at Holby, Danny asks the social worker Sarah about a “friend”. Sarah replies that the best route is marriage, and when Danny comes home to find Marija packing, he asks her to marry him.

A young girl, Keighley Clarke, is brought into hospital after she has started fitting. Her young mother, Tanya, is already in trouble and Keighley and her brother have been temporarily in care. Now Tanya is trying to prove that she can be a responsible mother. The problem is that she is doing this by working all nights and leaving Keighley home alone with her brother to take care of her. The young boy has been feeding Keighley the wrong things, which is the cause of her illness. Even though Janice tries to reassure Tanya that they will try to let her keep the children, the social worker comes the following day and takes them into care, saying that it is all for the best of the children and that a family has already been found for them. Tanya is upset and blames Janice for it, saying that she is sure that Janice does not have any children and that her husband has left her because she was an old hag.

Another patient is Frank Nicholls, a middle ages man who needs heart surgery after his first operation was not fully successful. His wife is in hospital with him, but when Frank is in threatre she admits to Chrissie that she does not want to look after him all the time and that it is all too much. Later she explains that a year earlier she met another man, but that it ended when the man went back to his wife and she feels bad for talking like that about Frank while he was in theatre.

Claire Bradley, has got a heart problem but also a possible eating disorder

Keighley Clarke, a young baby that starts fitting after her brother has been feeding her the wrong food

Alistair: And I thought we’d been through all of this. We talked about it, decided it was too soon.

Alistair: It’s been a week. That’s all. Now you’re telling me you’re going to march back to Owen, start all over again.

Janice: That’s exactly what he encourages you to do.

Alistair: Oh, and I don’t get any say.

Janice: You’re supposed to be on my side.

[Marija is about to leave]

Marija: You’ve been so good to Luke and me, but you can’t stop them.

Danny: That’s not true. I’ve been thinking… There’s a way that we can make this work.

Danny: Please, hear what I have to say. I want you to marry me, soon. As soon as we can.

In this article:Dan Sefton, HC Series 4 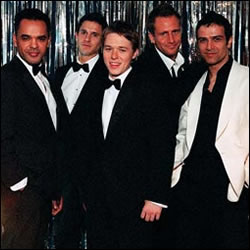