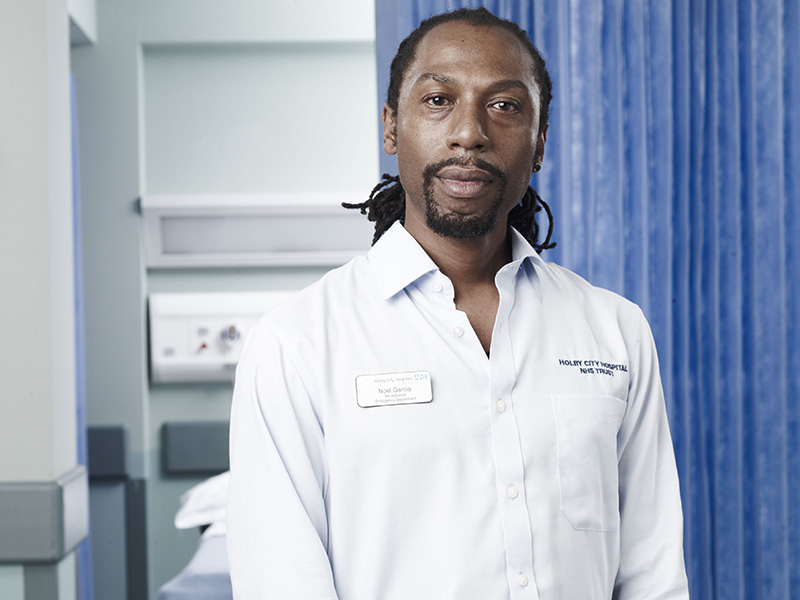 As one of the show’s best loved receptionists, viewers have enjoyed Tony Marshall’s character, Noel, getting to grips with the idea of becoming a father to barista Honey. Tony talks to holby.tv about his current storyline…

It’s lovely to see Noel getting such a big storyline this year, how does it feel for you?

It feels great to have a strong story – I really enjoyed it and it’s nice to play another side of Noel.

Normally Noel is involved in lots of light relief moments on the show, is it nice for you to play a more serious side to Noel and for viewers to learn more about him?

Oh yes definitely – it’s great for the viewers to learn about his past, we all have one!

How do you think Noel has coped with the revelation that Honey is his daughter?

Not very well – it was a total shock – he thought that Honey fancied him! Also he has money worries too and he feels that he’s a disappointment, he never knew and Miss Sparkle never hold him!

How do you think Noel and Honey’s relationship will develop over the coming series?

Watch this space – he doesn’t really know her so he’s got to make the effort to be the best dad he can be.

Noel doesn’t yet know about Honey’s other job as a dancer, how do you think he will react to this?

He hasn’t got a clue, it can be either angry/ upset with her/ disappointed. I’m looking forward to seeing what the writers do when and if he does. 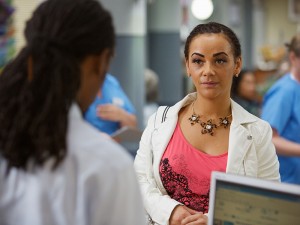 What’s it been like working with Chelsee, your onscreen daughter?

She’s lovely to work with and the casting has been top notch. She’s a Northerner like me so we’ve got that sense of humour too, we laugh a lot!

We’ve already seen how Noel feels about his current lifestyle, do you think becoming a father will push him to becoming more responsible and ambitious  in his work life?

Let’s hope so, he’s tried his hand at being a DJ and he’s seen Mac change jobs to better himself so who knows. His dad has dementia and he’s in a home that he pays for and now an added responsibility of a daughter – money’s tight!

You’re also a parent of a young son, are you enjoying fatherhood?

You hit a milestone age last birthday, how do you feel about hitting the big 5-0?

You’ve been on Casualty for 6 years now, what have been some of your most memorable moments on the show so far?

Working with guest artists that I admire – and being star struck. There’s too many to list, but the 25th anniversary was special too.

On the show, Noel and Big Mac are reknown for their comic moments, who would you say are the biggest jokers on Set?

Apart from me – George who plays Ethan (crazy Hugh Grant) and Jamie who plays Max — oh the stories!

Noel has a collection of action figures, is there anything you have a passion for collecting?

We recently saw you on Celebrity Mastermind, did you enjoy this experience? Was it nerve-wracking sitting in the infamous black chair?

Was very nerve racking as you don’t have a character to hide behind! Was more to prove something to myself and the black chair – real leather! (was happy to come 2nd but should have won)

Are there any other reality shows such as Strictly Come Dancing you would ever consider going on? Have the cast been proud of both Patrick and Sunetra’s recent performances on the show?

I’d quite like to do The Cube – think I can beat it! The cast were very proud of Pat and Sunetra – they surpassed themselves – don’t know if I could do that- never say never…

Casualty will also be hitting a milestone 30 years soon, do you hope to still be on the show?